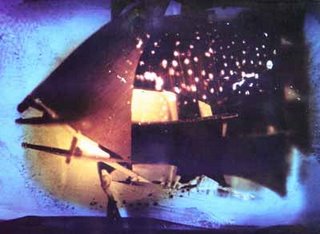 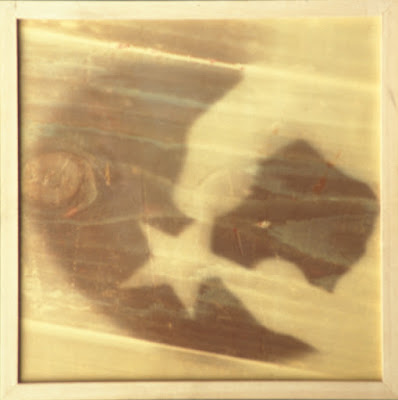 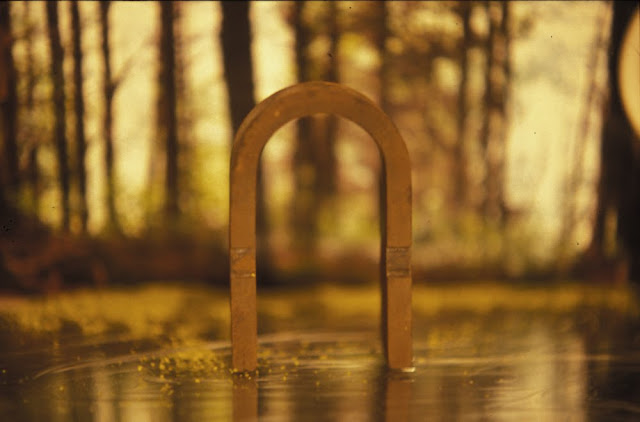 Boran’s latest series, Works on Film. Consists primarily of cibachrome prints from scratched, melted and/or broken negatives, and incorporates much layering of multiple exposures. With this building and layering of imagery and colour, the photographs contain a wonderfully sinister quality. Imaginary light seems to glow from behind the plain wood frames, drawing the viewer into a world of scratches and bubbles, awash with saturated colour. Certainly colour is the first thing noticed with this show, but beneath this, lurks sinister images reminiscent of childhood fears, daydreams and memories. There is violence and mystery, but playful fun as well. Michael Boran seems to be exploring the space of the film, and getting lost is both frightening and exciting. His playfulness is expressed in his manipulation of his medium, while mystery is expressed through the imagery.
The gallery at the Triskel suited the exhibition extraordinarily well. With its skylights spilling diffuse light through triangular cross beams, it was as intriguing as a long-bolted attic – without the dust and cobwebs. This was an atmosphere appropriate to the images, as if one had walked in and found something belonging to someone else, something both private and precious, some keys, and old ship. A few portraits. 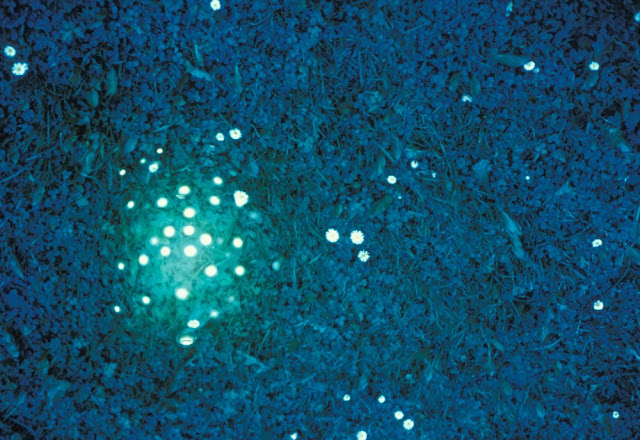 Almost all of these photographs have been manipulated in some way at the level of the slide or negative itself. The multiple exposures create a faded, iridescent ghost image that seems to flutter across the print. The first image in the series, Untitled(Bounty) recalls a childish spirit of adventure, all wild and reckless. A phantom ship glowing yellow and ochre, bursts full sail out of a damp blue. A very brave and romantic beginning; this ship is a forerunner of what is to come, dragging other stories and images out of the mist in its wake. And these stories and images are wildly varied, as if conjuring up extremely different dreams, yet all from the same mind.
Film Leader 1, 2 and 3 are images that could be nightmares, Red, black and yellow saturated abstracts melt and bubble together much like oozing and splitting amoebas. They are basic and raw. Film Leader 3 has an almost ancient symbolism, roughly the shape of a worn cross or a vaguely female form, as depicted in Sheela-na-gigs.
The three Film Leader images are the most wildly abstract: bursts of heat, energy, or emotion, whereas Rescue Notebook and Keys more closely resemble collage, but not one of cut and paste. These are collages of light and faded thoughts. The colour, tone and whole feel of both hearken back to some Pre_Raphaelite painting or Victorian diary, dreamy and seductive. In Rescue Notebook afaint image of a dog and some rope blend together with human figures in stone relief. A clear image of a school notebook stands out, taking up most of the right half of the space. Is this as simple as school. Study and the dog that followed you home? Are these mere childhood daydreams, hidden away in a forgotton box, found by a stranger? The images of dog and humans fade out of each other, giving the illusion of movement that is so striking in this exhibition. Movement of the eye, and movement of the mind as it trips over itself with so many almost forgotton thoughts.
The last image in the series, Keys, presents a box of old fashioned keys in the foreground. But this is no ordinary solid box of keys. It is as thin as air, whispering in, then back out of the overgrown wood background which could be a wall, a fence or a door, as in the novel The Secret Garden, where to find the one elusive key which would open all that is secret, is the basis of many a childish dream. This is a dream that for some continues into adulthood. It is interesting to conclude the exhibition with this image. Instead of the keys representing a closing or a locking, they are an opening to many things, a bounty which then leads back to the beginning.
On a second viewing, certain things become visually clearer, while yet more resistant to interpretation. Melt seems at first to be just that, a blob of melted film. Then a young girl’s hair can be discerned, tied back with a funny girlish hairband. It is her face that has become the yellow ochre swirl, full of tiny air bubbles. Obliteration and reconstruction of faces continues throughout the exhibition, particularly with Damaged Negative 1 and 2, where human eyes, nose and mouth have been scratched onto the negative. But lest this sound like a coroner’s report, the ‘damage’ does not arise from ruthless violence but more from a blurring of sense impressions. It requires the viewer to sift through the layers.
The image Teddy Bear is one of the exhibitions strongest. This photograph of a white, masked and consequentially very uncute teddy is extremely unnerving. Adding to this effect again are scratch marks scoring the figure’s body with jarring green and yellow tones. It has simultaneously an ‘in your face’ and sectetive, almost eerie, quality. This tension between the works accessibility – their open invitation to the viewer, and the secretive layers one then discovers – marks a sustained development from Boran’s previous Nature Morte show in the Temple Bar Gallery.

Email ThisBlogThis!Share to TwitterShare to FacebookShare to Pinterest
Labels: Works on Film