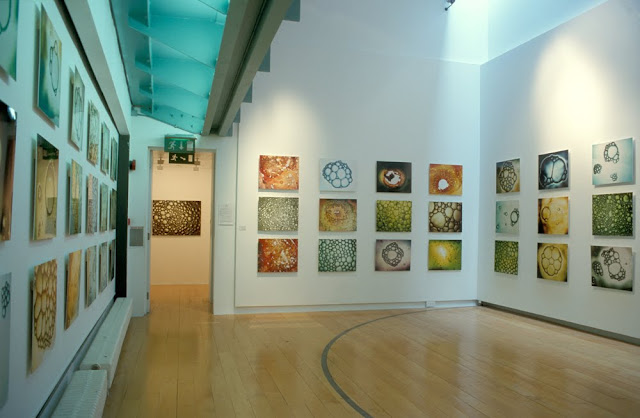 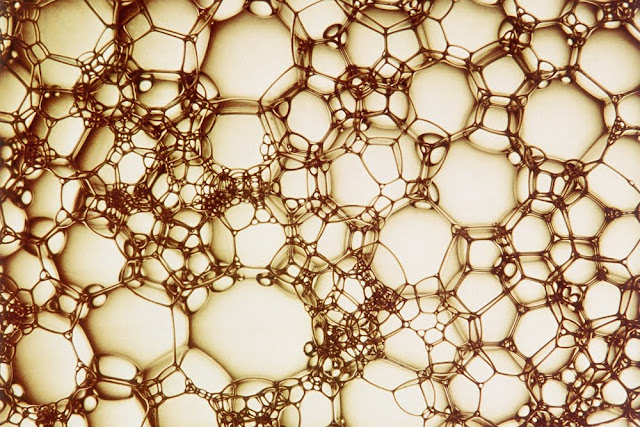 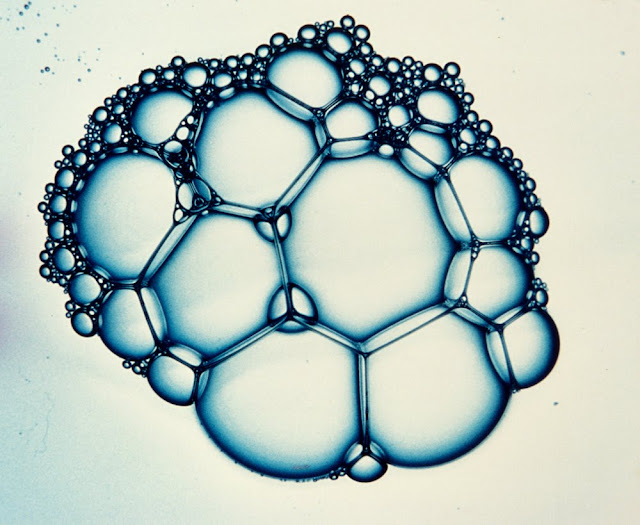 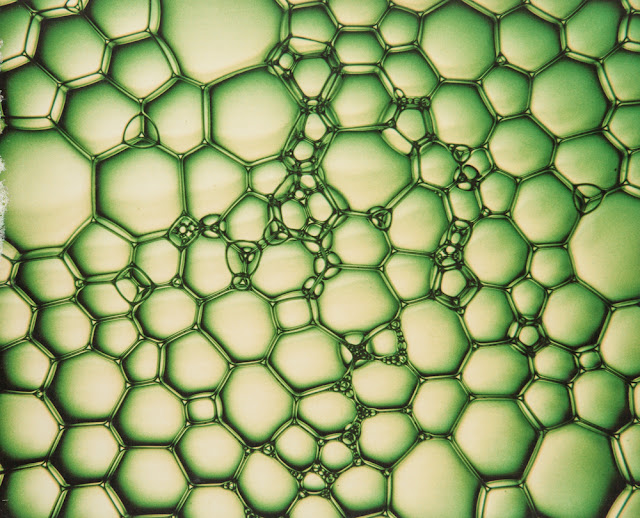 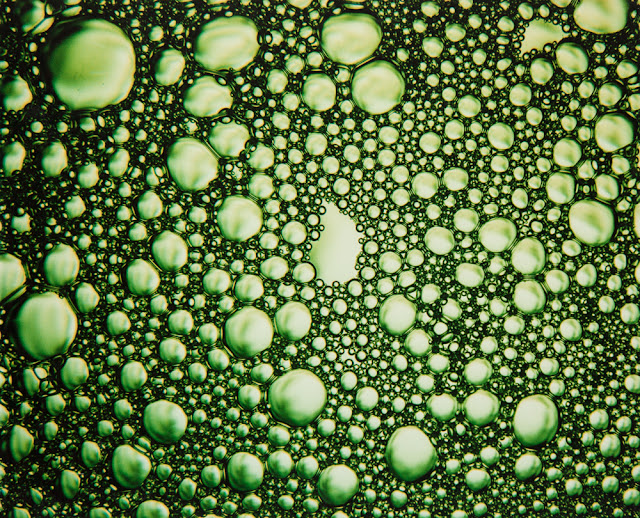 Watch a feature on the exhibition on  The View, RTE Arts programme, an introduction by the artist followed by a panel discussion.

Michael Boran’s extraordinary new work is all about bubbles . On entering the main chamber of his Palace of Bubbles protean associations bubble up: cell biology , space probes , Moorish architecture, the world economy,70s retro, worker bees, the boy in the bubble, afterimages, innocence, moments of epiphany, memory, the passing of time ……..
In the practice of meditation, thoughts are regarded as a flow of bubbles, rising into consciousness. And there is certainly a meditative quality to the Palace, the images , being free of fixed co-ordinates mean that we could be looking from either end of a telescope – at a single electron, or the expanding cosmos. Or through a time bubble, we could be witnessing the creation of Life itself as it emerged with a plop from the primal soup, billions of years ago .
At times awesomely beautiful, at others even slightly menacing, Boran’s bubbles set us off on a series of journeys into the architecture of imagery. We could start with the bubble images made from melted photographic film. Here, the film itself, usually eclipsed by the imprint of ‘content’ is revealed as a veil, a lattice of bubbles. We embark on a microscopic voyage into the film, into the beautiful madness of pure pattern and design that underpins all representation. You get the sense that those patterns, also presented in a series of ‘blueprints’ are the abstracted designs upon which Nature regenerates itself.
Throughout the work there is a playful insistence on exploring the blindspots of western perspective representation. In the outdoor projection piece, the fixity of the ‘eye’ in the perspective model is taken to extremes – with humourous consequences. Or, in pop mode, Bubble Projectile throws us into the photon chaos inside a giant eye. Or again, more lyrically, in the Exploded Projector installation we can dwell in the upside-down memory world of the glass globe/lens; we can see the inside of a light bulb, another bubble of sorts.
In their promiscuous masquerade bubbles confound the positive certainties of the perspective system, de-coupling the conjoined orders of perception and representation. Poised at the close of the photographic century, Michael Boran’s new work opens up a space between the burden of representation and the dizzying freedom of pure pattern.
Washing up will never be the same. 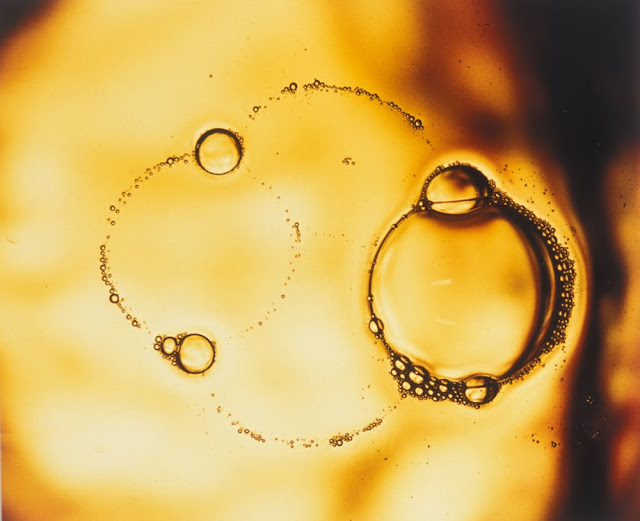 
Against a warm red background, they look like a swarm of bees. Elsewhere we see them cling together in honeycomb structures. Isolated under a microscope lens the translucent purity and rotundity appears fixed and permanent, at odds with the ephemeral, fleeting nothingness we know a bubble to be. In his first solo show since 1994, Michael Boran presents bubbles in all their infinite variety. For the central installation, the wals of the main gallery are taken up with a stunning array of 66 prints. When scrutinised seperately it is clear each has been given its own identity, named for its characteristics and associations, from Cornea to Nebula and [more humorously]Mild Green Fairy. With the aid of a slide projector, Boran extends the visual experience into the realm of 3D. Bubble Projectile is beautifully effective as an installation: light projected onto a rotating mirror ball throws a myriad of light squares onto the walls, their whirling movement contrasted with a static eye. The effect is like stepping into the ungraspable interior of a bubble. The whimsical origins of Boran's subject and the surface beauty of its depiction belie the complexity of his interests in perception, illusion, transience and the potential of the photographic lens: even later, when the bubble has burst, the slight splatter of this show's magic remains. 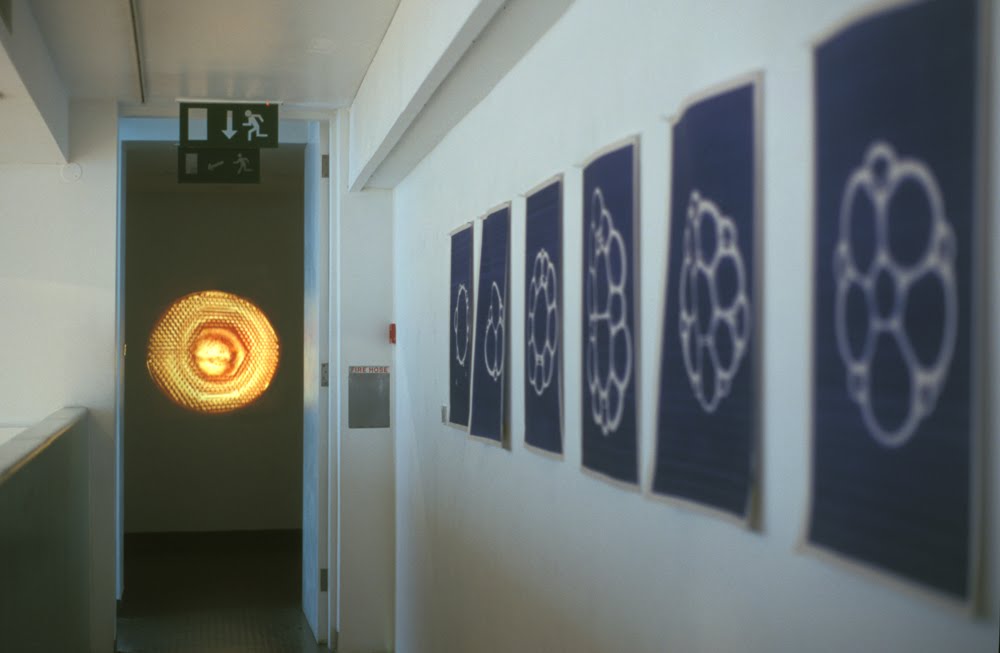 For visual desert, you couldn't do much better than Michael Boran's delightful 'Palace of Bubbles'. This photographic experience is one of joy and lightness - as the title suggests, Boran has been inspired by bubbles of different kinds. He experiments with light, documenting the capricious dances that bubbles will weave when disturbed, the changes in texture and pattern, etc.
The show consists of over 60 colour prints, initially baffling and resembling a possible multitude of things. The surprising geometric tendancy in bubble group formation connotes the honey chambers in a beehive; the floating of a solitary bubble with maybe a tiny group of baby-bubbles clinging to its skin is reminiscent of a cell under a microscope.
The fabulous beauty and apparent frivolity of the bubble pictures almost seems to have a subtext of menace. Clusters of round bubbles in a picture frame could be frogspawn, tapioca, the eggs of a poisonous insect - and, of course, they are a powerful metaphor for evanescence. Delicate and fragile, they could pop at any time. Some of the bubble images are made from melted photographic film, creating mad, mesmerising patterns within the destruction of the film's potential to contain real and recognisable images.
Boran also manages to present a challenge to his chosen medium. He confounds any expectations of 'traditional' photography, choosing instead to baffle, to provide the eye with something to decipher as well as to savour.
The 'Palace of Bubbles' also includes installations - one shows the inside of a lightbulb, a glass 'bubble' whose functionality veils its beauty. My favourite was the 'Bubble Projectile', a room upstairs which reconstructs the dizzying experience of being inside a huge eye. A golden toned melted bubble - the absence of a bubble - is projected onto the far wall, and a glittery mirror-ball hangs suspended in front of it. If you push the mirror-ball, thousands of tiny points of light fly across the walls, ceiling and floor of the little room as the ball swings. Simply gorgeous. 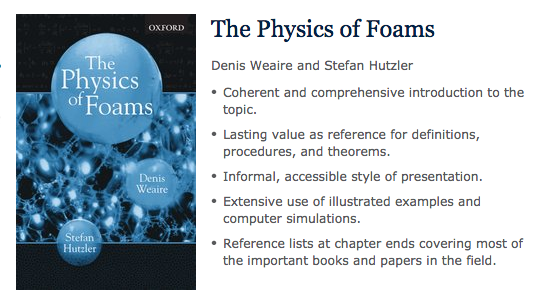 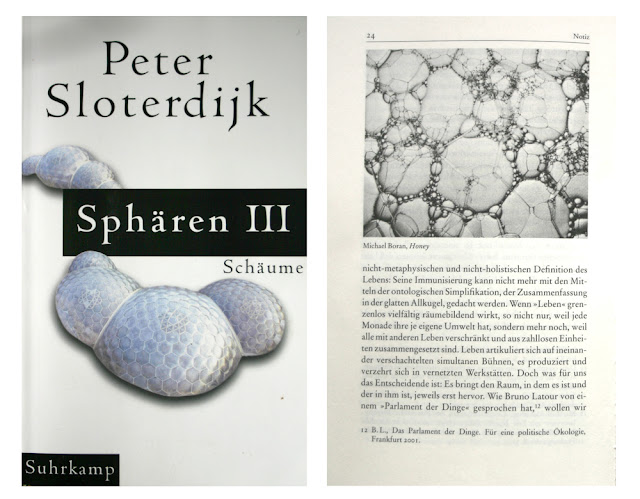 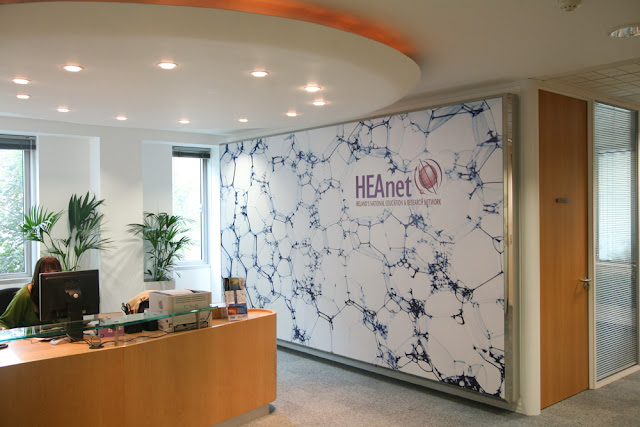 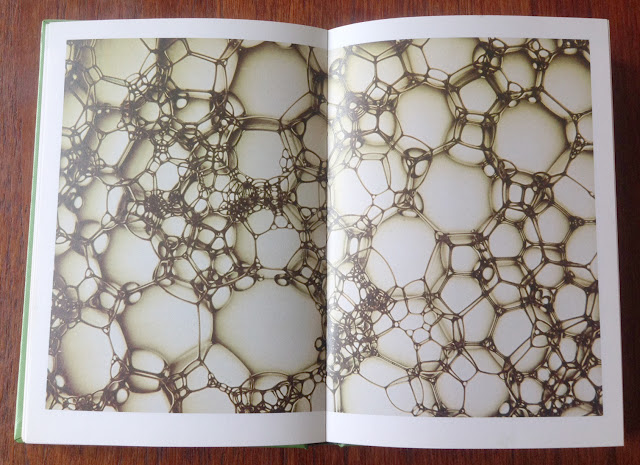 Email ThisBlogThis!Share to TwitterShare to FacebookShare to Pinterest
Labels: 1999 The Palace of Bubbles